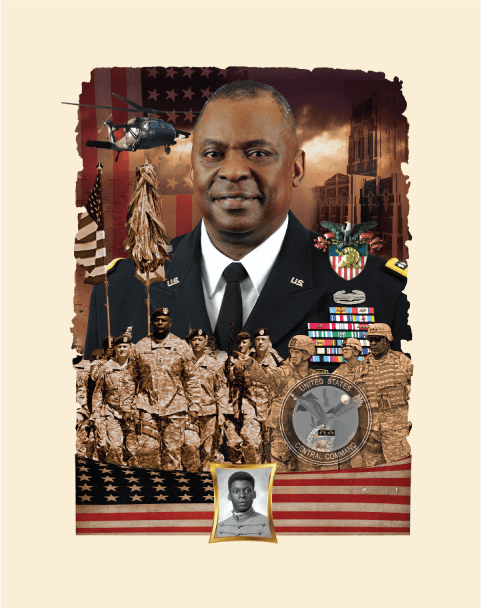 General Lloyd J. Austin, III retired from the Army on April 5, 2016 after over 40 years of distinguished service to the nation and the world. His last assignment was as the Commanding General, U.S. Central Command. General Austin has served in many high-ranking and pressure-filled military billets. Prior to the CENTCOM posting, General Austin was Vice Chief of Staff of the U.S. Army. Of course, General Austin has completed all of the military high-level education and training, including the Army War College.

General Austin was born on August 8, 1953 in Mobile, Alabama and raised in Thomasville, Georgia (coincidentally, the same hometown as the 1st African-American West Point graduate, Henry O. Flipper). General Austin’s military career began with his appointment to West Point in 1971. He graduated from West Point in June, 1975.

After graduation and commissioning as a 2LT, General Austin’s first assignment was to the Infantry Officer Basic Course at Ft. Benning, Ga. From Ft. Benning, he was assigned as a rifle platoon leader in the 3rd Infantry Division (Mechanized). Next was the Infantry Officer Advanced Course, then command of a Combat Support Company with the 82nd Airborne Division. General Austin has served in numerous airborne infantry slots throughout his career.

As General Austin advanced in rank, the nature and type of assignments reflected his increasing ascendancy as an Army officer.

He has served as the Assistant S-3 (Operations), 82nd Airborne Division, Operations Officer for the U.S. Army Indianapolis District Recruiting Command, and as a Tactical Officer at West Point. Other assignments included Operations Officer, 10th Mountain Division at Ft.

Drum, NY and later as Battalion Executive Officer. His next assignment at Ft. Drum was as a Brigade Executive Officer and Director of Plans, Training, Mobilization, and Security. General Austin was promoted to the rank of Brigadier General in January, 2002.

In September, 2010, he became the last Commanding General, U.S. Forces-Iraq. General Austin has commanded U.S. and coalition armed forces in war on a strategic level comparable to the wartime commands of MacArthur, Ridgeway, or Schwarzkopf.

His last executive-level position before assuming command of CENTCOM was a Vice Chief of Staff, U.S. Army. General Austin was the first African-American to hold this position.