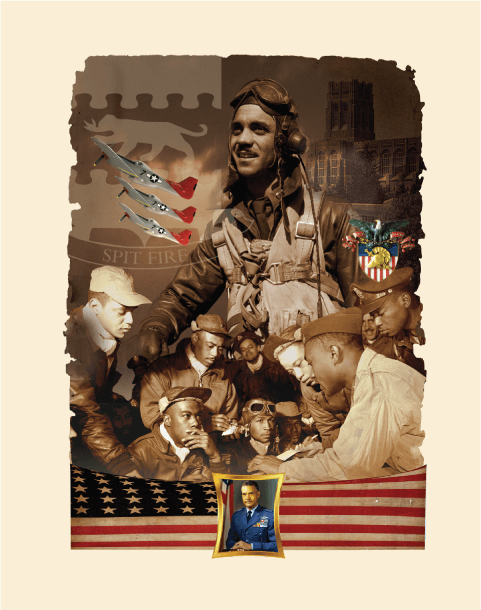 This is where his real test as a future leader began. In his years at West Point, he was totally shunned by his classmates. He never had a roommate. He ate all of his meals alone. He never attended any of the social events sponsored by West Point for the cadets during the entire four years he was a cadet.

Interestingly, many of Cadet Davis’ classmates, some of whom went on to have prominent military and public careers, never tried to befriend or help Cadet Davis.

At the age of 13, Benjamin O. Davis, Jr. went on a flight with a barnstorming pilot at, what was then, Bolling Field in Washington, DC. It was here where his passion to become a military pilot took root. After attending the University of Chicago for two years, Benjamin O. Davis, Jr. received an appointment to attend West Point by U.S. Representative Oscar De Priest, the only African-American member of Congress at the time. Cadet Davis entered West Point in the summer of 1932.

This treatment did not dampen his desire to continue, but instead, made him more determined to graduate. His determination earned him the grudging respect of some of his classmates. The biographical note beneath his picture in the 1936 Howitzer (West Point yearbook) reads:

“The courage, tenacity, and intelligence with which he conquered a problem incomparably more difficult than plebe year won for him the sincere admiration of his classmates, and his single-minded determination to continue in his chosen career cannot fail to inspire respect wherever fortune may lead him.”

He graduated ranked 35th out of 278 cadets in his class, becoming only the 4th African-American to graduate from West Point and the first in the 20th century. Denied entry into the Air Corps, he was assigned to the 24th Infantry Regiment (a Buffalo Soldier unit).

Responding to public pressure to increase African-American participation in the military, the administration of President Franklin D. Roosevelt, in early 1941, named Davis to the first training class of a black flying unit at Tuskegee Army Air Field in Alabama. General Davis’ dream to fly was realized when he became the first African-American pilot to solo in an American military aircraft and earned his wings as a military pilot in March of 1942.

In July, 1942, LT COL Davis was named commander of the first all-African-American flying unit, the 99th Pursuit Squadron. It was not until 1943 that the unit was ordered to Tunisia where they were equipped with the Curtiss P-40 fighter aircraft. After some fits and starts, the 99th first saw combat in June 1943.

Colonel Davis personally led many of the combat missions assigned to the 99th as they flew P-40’s, P-47’s, and P-51’s. For his valor in leading these missions, he was awarded the Silver Star and the Distinguished Flying Cross. In September, 1943, Colonel Davis was called back to the United States to take command of the 332nd Fighter Group (the famed Red Tails), a larger all African-American unit preparing to go overseas.

Having proven his capabilities as a leader, General Davis was successively assigned as commander of the 477th Bombardment Group, 51st Fight-Interceptor Win (an integrated outfit flying the F-86 Super Sabre), and the 13th Air Force.

Upon retirement from active duty, General Davis held the rank of Lieutenant General and was the highest ranking African-American officer on active duty in the United States military. On December 9, 1998, General Davis was advanced in rank to General, U.S. Air Force (retired), with President Bill Clinton pinning on his 4th star.

General Davis never returned to West Point for over 50 years, based on how he was treated as a cadet. He eventually returned in June, 1987 to see for himself the changes within the academy since his graduation and to conduct research for his autobiography.