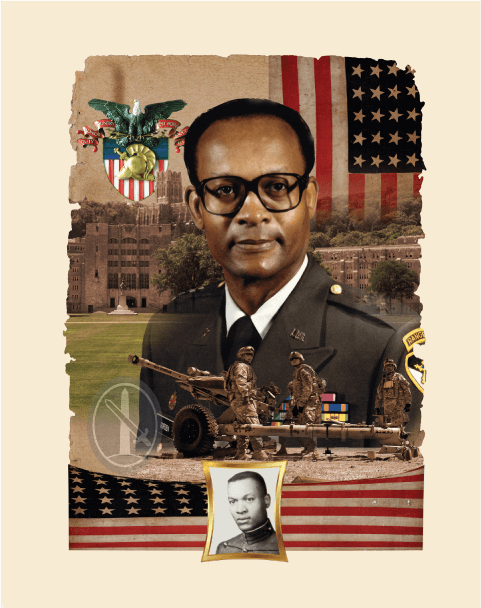 General Fred A. Gorden was born in Anniston, AL in 1940. He moved to Battle Creek, MI as a young child to be raised by his aunt. General Gorden finished high school excelling in academics and athletics as a member of the National Honor Society and all-city basketball team.

General Gorden was attending a local junior college in 1958 when he received word of his nomination and appointment to West Point by his local congressman. General Gorden entered West Point as one of two African-American cadets in his class, but by the end of the first semester, he was the only one.

Upon graduation from West Point in 1962, General Gorden was commissioned as a Second Lieutenant in the Field Artillery. After earning a Ranger tab and Airborne wings, he was assigned to the Panama Canal zone.

In 1967, General Gorden commanded a field artillery batter in Vietnam. After Vietnam, he earned a Master’s degree in Spanish literature, language, and civilization; followed by an assignment teaching Spanish at West Point.

Assignments that followed included Executive Officer in the Office of the U.S. Army Chief of Legislative Liaison and Commander of Division Artillery of the 7th Infantry Division (Light) at Ft. Ord, California.

He was promoted to Brigadier General in 1984, and in 1987, he was appointed the 61st Commandant of Cadets at West Point. He became the first African-American to hold this position in the, then, 185-year history of West Point.

As Commandant, General Gorden was responsible for the training, discipline, and physical condition of the Corps of Cadets. He was second in command to the Superintendent of West Point. General Gorden’s focus and influence were clear. He sought to lead the Corps of Cadets, not to command them to do things. His presence alone served as acknowledgment of the existence and significance of the African-American cadets from the highest levels of the West Point command structure.

General Gorden endeavored to interact with African-American cadets in ways that validated their limitless possibilities. He represented African-American history walking among the cadets on a daily basis. In the same summer that General Gorden began his tour as Commandant, General Benjamin O. Davis, Jr. returned to West Point after his 50-year self-imposed absence from the academy.

Following his assignment as Commandant, General Gorden assumed command of the 25th Infantry Division (Light) at Schofield Barracks, Hawaii as a Major General. From 1993-1995, he served as Commander, Army Military District of Washington, DC. During this time, he escorted the family of President Richard Nixon during his funeral. He also escorted the family of General Benjamin O. Davis during his promotion to Four-Star General. General Gorden retired from the Army in 1996 as a Major General after 34 years of military service that involved military and social change and healing.