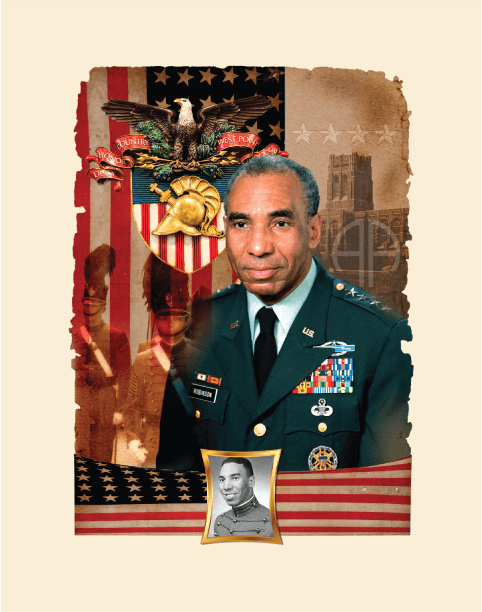 He graduated with the Class of 1951 and was commissioned in the Infantry. He went on to lead every size unit from platoon to an Army. His first assignment was with the 11th Airborne Division as a Platoon Leader. He saw his first combat in 1952, as a Rifle Company Commander with the 7th Infantry Division in the Korean War, where he was awarded the Bronze Star. Robinson returned to the United States, became an instructor at Airborne School, then served a year in Africa as a military liaison with the Unites States Mission in Liberia.

He attended the National War College and then received his Master’s Degree in International Relations from the University of Pittsburgh. In 1968, Robinson again commanded in combat. This time as a Battalion Commander for the 27th Cavalry in Vietnam, where he excelled in a time of significant and intense combat operations during the peak of war.

He received two Silver Stars and a Distinguished Flying Cross for his leadership under fire. He then served in Vietnam on the staff of the 1st Cavalry Division.

After leaving Vietnam, he became the Executive Officer to the Commander in Chief, Pacific Command (CINCPAC) in Hawaii and then went to Fort Bragg as a Brigade Commander with the 82nd Airborne Division. He returned to the Pacific as the Commander of United States Army Forces in Okinawa before deploying back to Fort Bragg.

In 1976, he became Commanding General of his beloved and famed 82nd Airborne Division. His final command was back to the Pacific at Camp Zama, Japan, where he was the Commander of United States Army Japan and IX Corps. His final assignment in the Army was in Europe as a Four-Star General where he served as the United States Military Representative to the North Atlantic Treaty Organization.

It is impossible to appreciate all the challenges that Roscoe Robinson overcame as an African-American growing up in America under segregation. But he took it all in stride, always with a positive attitude and considering himself to be very fortunate.

The United States Army is fortunate to have had a leader of such character who helped break down racial barriers and lead soldiers of all races, colors, and religions. In peacetime and under fire in combat, he proved he was a leader worth of following.

After his retirement, General Robinson was asked to supervise a panel that was evaluating the Korean War performance of some highly criticized Army units. He also served on the board of Northwest Airlines.
After a battle with leukemia, GEN Roscoe Robinson died on July 22, 1993 at the age of 64, and was buried at Arlington National Cemetery.